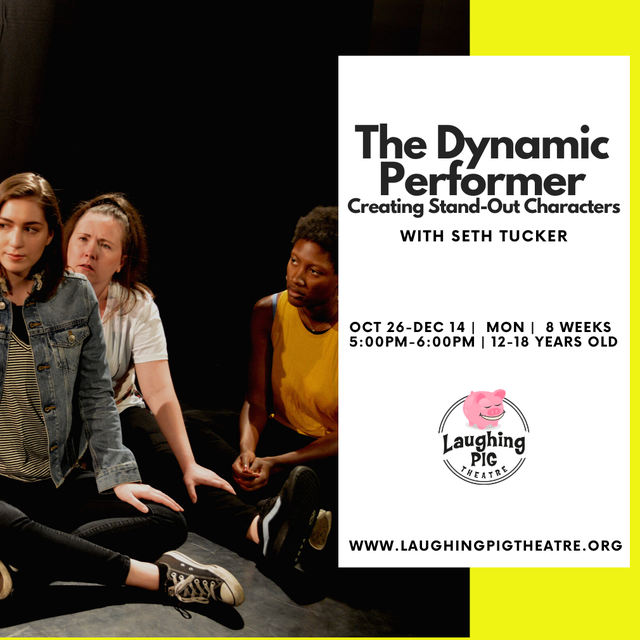 Every student has to prepare & memorize 2 pieces in advance. Either 2 Full Songs, 2 Two-Minute-Long Monologues, or 1 of each (If choosing songs you must find a karaoke track. Youtube links are fine). Please email us the selected pieces before the first day of class: taylor@laughingpigtheatre.org

What makes the difference between an average performance and one that you never forget? How can you connect with characters that come from a different background than your own? Why are some actors able to display their emotions so honestly while others struggle to even discover the empathy? With “The Dynamic Performer,” all students will be fully engaged with each performer as we deconstruct the material, characters, and emotions. Rooted in honesty, we will turn “theatre” into reality, finding ways to connect and empathize with our character and their situation. From there we work together to develop bold choices and layered emotions that highlight both comedic and dramatic songs or monologues. In an industry that is over saturated with artists, my goal is to push you to accept nothing less than extraordinary. And when theatres open again, you will be ready to nail those auditions, win those awards, and steal the show. By the end of this 8 week course you will have the tools you need to not only create stand out performances but also the thought processes to emotionally connect with stories unlike your own.

QUOTES FROM REVIEWS ABOUT SETH TUCKER

“Tucker seamlessly and successfully inhabits everyone who becomes a part of the story. “ - Valley Screen and Stage

"Is a comedic gem” - Talkin' Broadway

"Absolutely perfect” - In A Director's Viewpoint

"Seth Tucker will break your heart” - Cherry and Spoon

"Delivers the show’s most undeniably, laugh-out-loud, funniest moment of the year” - Valley Screen and Stage

"Is a showstopper” - Examiner

"Is a delight" - NorthJersey.com

"My favorite performance of the night’ - Stage Write

BY REGISTERING FOR A CLASS YOU ARE AGREEING TO ABIDE BY THE POLICIES CONTAINED WITHIN THE STUDENT HANDBOOK.